NOTE: During the DiscoVision days and going into the MCA Videodisc era, there was no real warning screen.

Warning: On a blue background, we see the generic warning text in white.

Trivia: The entire warning text was used in the end credits of Universal's films during this era, and is still used currently (albeit with "THE" placed in between "UNDER" and "LAWS").

Availability: Ultra rare. It was seen only on Universal laserdisc/DiscoVision releases of the time, after the movie ends. This was also seen on non-DiscoVision releases pressed at the DiscoVision plant such as the Magnetic Video laserdisc of Alien, the Columbia Pictures Home Entertainment laserdisc of Close Encounters of the Third Kind: The Special Edition, and the Paramount Home Video laserdisc of Charlotte's Web (all issued in 1981). It was also seen on some MCA Home Video/Videocassette releases such as the 1981 VHS of The Andromeda Strain, the 1982 VHS of The Eiger Sanction (both from MCA Videocassette), and the 1984 MCA Home Video release of Rear Window. This was also used on the 1979 Fotomat rental Betamax and retail VHS of Saturday Night Fever, which used the DiscoVision master. Strangely, this is missing from the DiscoVision releases of The Marcus-Nelson Murders, Slaughterhouse-Five, Jaws 2, and The Wiz. This can also be seen on the Paramount Home Video laserdisc of Grease, which was originally intended as a DiscoVision title. The black background variant makes a surprise appearance on the 1998 GoodTimes Home Entertainment DVD release of The Front Page, as its transfer utilizes the MCA Videodisc master.

Warning: On a black background, we see a small warning in white Impact font.

Availability: Seen on a handful of DiscoVision releases, as most of them went directly to the logo. 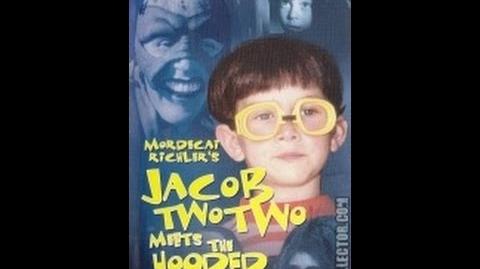 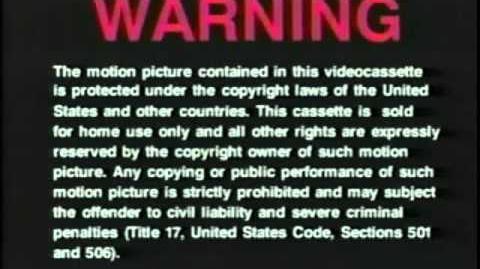 Warning: On a black background, we see the word WARNING at the top of the screen, in red and in Helvetica font. Below it we see the standard warning text, in smaller print and in white.

Music/Sounds: None, but on Descriptive Video Service VHS's, a narrator reads out the warning, though the announcer varies by tape.

Variant: On Universal Music releases, the text appears in English first, then French and Spanish.

Availability: Seen on all Universal releases from 2005-2012, such as Friday Night Lights (first appearance), Apollo 13: 10th Anniversary Edition, In Good Company, White Noise, Unleashed, American Dreamz, Hollywoodland, Breach, Baby Mama, and The Pirates Who Don't Do Anything: A VeggieTales Movie.

Variant: On some releases, the word "www.iprcenter.gov" is underlined and in blue.

Availability: Current. Seen on newer Universal releases on DVD and VOD, such as The Grey, Side Effects, and Safe House, among others.

Warning: Same as the PolyGram warning.

Variant: Sometimes on rental releases along with DVD and retail releases (only from 2001-2002) the text is in Arial font. Notably, on this variant, the word "Renting" is taken out.

Availability: Seen on Universal VHS and DVD releases from 1999-2004. Examples are Guest House Pardiso, The Flintstones in Viva Rock Vegas, The Mummy, Jurassic Park, Bridget Jones' Diary, The Mummy Returns and Jurassic Park III. It also appears on DreamWorks, Channel Five, Right Entertainment and Abbey Home Entertainment releases. From 2002-04, it was used in in tandem with the next warning.

Warning: The warning in Arial Black with "COPYRIGHT NOTICE" on the top fades in, and after 20 seconds it fades out.

Availability: Seen on Universal releases from 2002 onward, among them About a Boy and Thunderbirds. It can also be seen on DreamWorks, Abbey Home Media and Right Entertainment VHS and DVDs as well. In North America, this also appears on the Blu-rays of Howard the Duck and Smokey and the Bandit (2017 release), after the feature ends.

Add a photo to this gallery

Warning: On a black background is the red word "WARNING" in a Helvetica font, and the warning text in white, all scrolling up, and in capitals.

FX/SFX: The text scrolling up.

Availability: On most Universal, PolyGram and DreamWorks VHS releases in Australia from 1999 onward, such as Out of Africa, Cast Away, Lock, Stock & Two Smoking Barrels, Small Soldiers, Bikerboyz, Shrek 2, Shark Tale and Meet the Parents, among others.

Warning: On a black background, we see a copyright notice.

Availability: Seen on Universal and DreamWorks DVD releases in Australia from 1999-2003, such as Maisy's Farm and Child's Play 3.

Add a photo to this gallery

Warning: On a black background, we see Australian warning text.

Availability: Seen on Universal and DreamWorks DVD releases in Australia from 2003 onward, such as Curious George and Despicable Me, among others.

Warning: On the opening frame of the 1998-2012 Universal Studios Home Entertainment logo, we see French warning text. Then the logo starts.

Music/Sounds: A few seconds of silence, and then the 1997 Universal fanfare.

Music/Sounds/Variant: None on DreamWorks releases.

Availability: Seen on Universal and DreamWorks VHS releases in France, such as Small Soldiers, Loving You and Shark Tale.

Retrieved from "https://company-bumpers.fandom.com/wiki/Universal_Studios_Home_Entertainment_Warning_Screens?oldid=41762"
Community content is available under CC-BY-SA unless otherwise noted.