Music/Sounds: An orchestral fanfare with a male announcer saying "MGM/UA Home Video invites you to watch an exclusive interview with the star and makers of The Manchurian Candidate: Frank Sinatra, co-producer/director John Frankenheimer, and co-producer/screenwriter George Axelrod, immediately following the movie."

Availability: Appears on the 1988 VHS of The Manchurian Candidate. 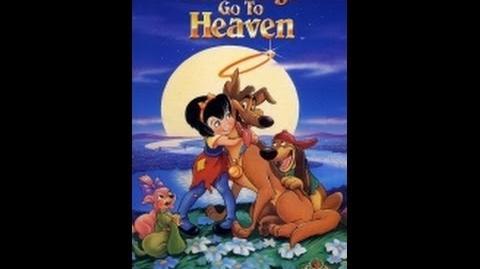 ID: In front of a living room backdrop, Dom DeLuise (the voice of Itchy in All Dogs Go to Heaven) says "Hi! I'm Dom DeLuise, and I have a message for you at the end of the movie. So don't rewind, stick around, you might learn something."

Trivia: Dom was telling us to stay tuned for his special safety message promoting the Boys & Girls Club of America.

Availability: Only appears on the 1990 VHS of All Dogs Go to Heaven.

ID: On a still of David O. Selznick's family's house, a trio of behind-the-scenes clips from Gone with the Wind wipe in from the right. On the left is the following text fading in:

At the end of the
feature presentation
we have included
some highlights from
the prize winning
documentary,
THE MAKING OF
A LEGEND: GONE
WITH THE WIND

Then it fades out while the next text fades in:

Produced by the
sons of David O.
Selznick, this
program is also
available from
MGM/UA Home
Video.

FX/SFX: The scenes, the shot of the house fading to another, the fading of the text.

Music/Sounds: Music from the film.

ID: On a blue background, we see the words:

Variant: There exists a variant with the bottom half of the text instead reading:

"IT'S FOR YOU"
performed by Shanice

ID: Against an aerial shot from Six Degrees of Separation, the text "PLEASE STAY TUNED FOR THE FULL LENGTH FEATURE OF SIX DEGREES OF SEPARATION, IMMEDIATELY FOLLOWING THESE SELECTED SCENES . . ." is shown.

Availability: Appears on the 1994 demo VHS of Six Degrees of Separation.

ID: On a purple gradient background is the white text:

Variant: The UK release features the same text, except rearranged and with "FEATURE" replacing "program." It's also in a yellow Futura font.

FX/SFX: The fading of the ID.

Availability: Appears on the 1995 VHS of Speechless.

ID: On a black background, we see the text "STAY TUNED FOR A BEHIND THE SCENES LOOK AT SPECIES AND ITS' CREATOR, H.R. GIGER." A green spotlight is behind it, which then dies down.

FX/SFX: The light dying down.

Music/Sounds: A man screaming and some phasing noises.

ID: On a black background, we see the text "Following the program is the full length music video for 'Tomorrow Never Dies' performed by Sheryl Crow."

Availability: Appears on the 1998 VHS of Tomorrow Never Dies.

ID: Against a flowing red velvet background, the words "Sleek," "Stylish," and "Luxurious" fade in, then slide across the screen. Four black screens follow, with the following text (all in a Times New Roman font) zooming in and flashing to white:

In-between each of these screens, we see a clip from the movie. After the fourth clip, we cut back to the red velvet, with "Stay Tuned After The Feature For More Details" over it. Underneath are logos for Zenith, United Airlines, Point Pleasant Resort, and Chenay Bay. Six more clips appear before we fade to black.

Trivia: This ID was promoting the Thomas Crown Affair Luxury Sweepstakes, which offered a chance to win a trip to the Caribbean. The "Prepare for the Affair and the Sweepstakes of the Year" portion reappeared during the actual promo, except with a different clip after the fourth screen.

FX/SFX: All live-action except for the screens with text.

Music/Sounds: A generic pop piece, with a male voiceover saying "Slip into something sleek, stylish, and utterly luxurious." During all four of the black screens, we hear a trumpet blast for each line of text. The announcer returns later and says "Stay with us after the feature for details on how to enter the most extravagant sweepstakes ever! You could find yourself living the life of luxury!"

Availability: Appears on the 1999 VHS of The Thomas Crown Affair.

ID: We fade into a scene from Pink Panther short Pink-A-Rella in which the witch attempts to get into the air and eventually flies off with the Panther in pursuit and eventually giving up. During this, the words "Don't Fly Away..." and "Stay Tuned For...", in a green/pink color, fade in and slide across the screen. The scene then fades to the Pink-a-Rella title card with the large car fading out and being replaced with "AFTER THE FEATURE", after which a circle wipe wipes the ID to black.

Music/Sounds: Just the audio from the short.

Availability: Appears on the 1999 VHS of The Mod Squad.

ID: On a background of a moving light-green cloth, we see a logo for the Return to Me Roman Escapade Sweepstakes program with logos for Barilla, iVillage.com, Alitalia, Ladies' Home Journal, and italiatour!, with an MGM Home Entertainment logo in the middle. Sandwiched between these, a black bar appears with the words:

Trivia: At the time of this VHS's release, there was an opportunity to win a trip to Rome through the Return to Me Roman Escapade Sweepstakes program, which ran until December 12, 2000. There is a promo for this following the film, which this ID advises us to stay tuned for.

Music/Sounds: Music from the promo plays as its male announcer says "Stay tuned after the feature presentation for details on the Return to Me Roman Escapade Sweepstakes."

Availability: Appears on the 2000 VHS of Return to Me.

ID: On a background of what appears to be timecoded camcorder footage of a man and some birds, we see the text "STAY TUNED AFTER THE FEATURE FOR THE ALTERNATE ENDING AND DELETED SCENES FROM HANNIBAL."

Availability: Appears on the 2001 VHS of Hannibal.

ID: On a black background, we see the words "Stay tuned for an exciting featurette after the film with exclusive behind-the-scenes footage of the making of 'Crocodile Hunter: Collision Course'."

Availability: Appears on the 2002 VHS of The Crocodile Hunter: Collision Course.

ID: Against a scrolling light blue background, the text "STAY TUNED FOR AN EXCITING BEHIND-THE-SCENES LOOK AT "DIE ANOTHER DAY" AFTER THE FEATURE PRESENTATION" slides in.

FX/SFX: The background, the text.

Music/Sounds: The end of the James Bond theme.

Availability: Appears on the 2003 VHS of Die Another Day. 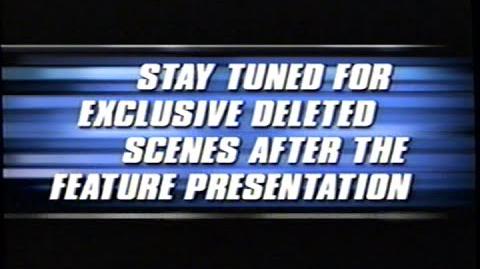 ID: On a black background, a blue/white moving streak appears and the words...

STAY TUNED FOR
EXCLUSIVE DELETED
SCENES AFTER THE
FEATURE PRESENTATION

slide in at a fast rate.

FX/SFX: The background and the sliding.

Availability: Appears on the 2003 VHS of Agent Cody Banks.

ID: On a pink-white gradient background, we see the text "STAY TUNED AFTER THE FEATURE PRESENTATION FOR DELETED SCENES FROM" (with the first letter of "STAY" in a script font), and the movie's logo underneath.

ID: On a black background is the white scrolling text:

KEEP WATCHING FOR THE
ADDED EXTRAS AFTER
THE FEATURE FILM

THE MAKING OF THE TERMINATOR -
A RETROSPECTIVE

FX/SFX: The scrolling of the text.

Availability: Appears on the 2000 UK Special Edition VHS of The Terminator.

Retrieved from "https://company-bumpers.fandom.com/wiki/MGM_Home_Entertainment_Stay_Tuned_IDs?oldid=42500"
Community content is available under CC-BY-SA unless otherwise noted.