Note: The modified screens listed on this page, shown on videocassettes and DVDs, are used in the United States of America and Canada. They are also used in some international countries. 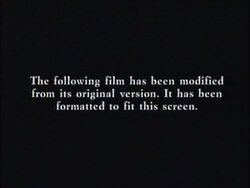 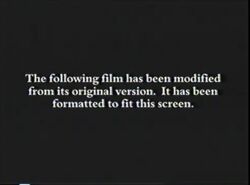 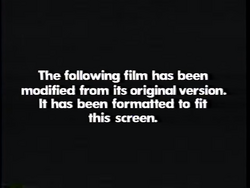 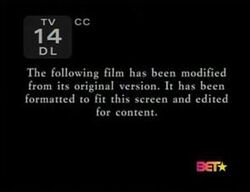 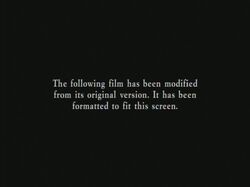 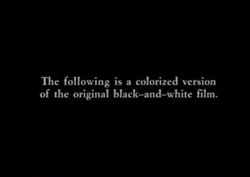 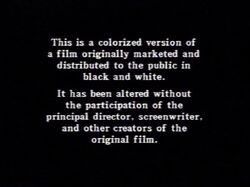 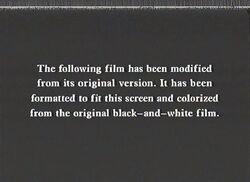 Modified Screen: We see the words "The following film has been modified from its original version. It has been formatted to fit this screen." on a black background.

FX/SFX: Just the simple fade in and fade out. Fullscreen DVDs just cut in and out, except for the My Neighbor Totoro and Boondock Saints variants and the full-screen DVD of Independence Day.

Music/Sounds Variants: On DVS tapes, a voiceover is heard reading the full text, preceded by any of the following:

Availability: On all Fox releases during the era (mostly VHS, the exceptions being tapes with the below screen, Canadian prints of Kiss of Death and Blood and Wine, some 1995-97 Selections tapes, and 1998 reissues of The Paper Chase and Tales from the Crypt, which use no modified screen at all), including Ghost in the Machine (the first tape to have the regular version), Sugar Hill, Bad Girls, Baby's Day Out, True Lies, Courage Under Fire, Home Alone 3, Never Been Kissed, Ice Age, Antwone Fisher, earlier prints of Men of Honor, Just Married, The Passion of the Christ, Man on Fire, What the Bleep Do We Know!?, Sideways, and Roll Bounce. Strangely, this appears on the 2003 VHS releases of Finding Nemo, Shanghai Knights, and Rabbit-Proof Fence, the 1998 pan-and-scan VHS/Laserdisc of Titanic, the 1999 VHS releases of 200 Cigarettes and The Birds, the 2006 demo VHS of Failure to Launch, the 2007 Full Screen DVDs of Dreamgirls, Norbit, and Blades of Glory, and the Anchor Bay tapes of Army of Darkness, Manhunter, and Maximum Overdrive. Also on some full-screen DVDs and full-screen sides of double-sided DVDs of the era, as well as some Fox Cinema Archives DVD-Rs, such as The Sweet Ride and Alex & the Gypsy. Strangely enough, this did not appear on some copies of Alien: Resurrection (most copies actually showed this screen), which instead use the 1994 MGM/UA modified screen. It also appears on a Peruvian VHS of Anastasia.

Availability: Rare. It can be seen on the VHS editions of The Pagemaster, Secrets and Lies, Paradise Road, The Secret Agent, Ever After: A Cinderella Story (as well as a Premiere Series reissue), and Woman on Top (retail and demo versions), as well as THX-certified copies of Die Hard with a Vengeance, 1997 Selections reissues of The Verdict, Unlawful Entry, Big Jake, and Commando, the 1999 Millennium Collection reissue of An Affair to Remember, a Spanish subtitled print of The Siege, a 2001 reissue of One Fine Day, a timecoded screener of X-Men, the demo tapes of The Great White Hype, The Thin Red Line, Dude, Where's My Car?, and Kung Pow! Enter the Fist, later prints of Men of Honor, and full-screen DVDs of Cast Away (also seen on the VHS), The Sound of Music, Digimon: The Movie, and Nora's Hair Salon.